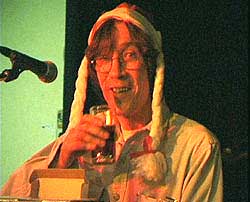 Written by Peter Moore: In the early seventies, listening to Caroline in my bed-sit, I began to wonder who was this remarkably voiced and brilliant man who captivated me with his vast and varied musical appreciation.

A few months later I drew up alongside the Mi Amigo off the Dutch coast to be welcomed by Bob Noakes, Andy Archer and Tony Allan. Andy and Tony were more pleased I think to see the pretty young Dutch boy who was piloting my tender.

After a while of being shown around, the crew suggested that I ought to get ashore in advance of a coming storm, but in truth I think I had outstayed my welcome with too many foolish questions.

On the return trip to land I had to steer the tender, the Dutch boy had been plied with too much drink. He was very happy but could not understand why the disc jockeys had given him their phone numbers.

Years later I met Tony on an evil night in Ramsgate, on a fishing boat that could not leave for the Mi Amigo because of engine trouble. Tony was drunk and terrifying. He wondered if by our all holding hands, L.A. may not fix the engine. I felt that it would take only one wrong word for him to attack me and so I slunk away.

Then I met him again towards the end of the life of the old ship. I had arrived on a motor barge delivering diesel oil and we were in some trouble ourselves. Tony was again the gentleman I had met in the first instance and could not have been more concerned and caring.

I cannot comment on his distinguished career in Ireland, I am sure that a better person such as Chris Cary can do that and indeed I had all but forgotten about him until Ross Revenge came to London in 1995. The crew noticed a forlorn figure sitting on a bench near the ship and it was Tony. He was immediately invited on board and put on air.

Again he disappeared and I heard no more until 2001, when out of the blue he called. Surprisingly, since he was such a private man, he wanted all his old friends to have his number.

Being an opportunist I asked him at once if he would create some new voice overs for us. He said that it may be as well to do this soon since he had in his words ' a bit of cancer '.

I could not think of a more cruel thing for a man blessed with such a voice to contract throat cancer. However he never complained even though the medical profession built him up and knocked him down many times. He always said that there were many people in worse situations than his own.

At one stage he was buoyed up by the promise of an operation, albeit a major one, that would restore him to health. When this possibility was taken from him at the last moment he went out and got spectacularly drunk.

When he finally regained lucidity the next day, he told my good friend Bob (Buzby) Lawrence, 'bloody hell Buzz, not only am I going to die, I've got a bloody hangover as well.'

Many of us began to think that he was indestructible and each time the illness pushed him to the brink he bounced back again. I last saw him at Easter, looking dapper in a fabulous suit and a Ben Sherman shirt. We planned his return on air.

The last of our family to see Tony were Dave Foster and Rob Ashard who visited him on Thursday. Tony was chuckling about the huge credit card bills that he never would have to pay but he was concerned to see his beloved cat once again and to allocate all his possessions to the right people and to ensure that we would mark his passing in the way he specified. He also planned his last, last programme but sadly time defeated him.

Tony slipped in to a coma this morning and died around 11am with his brother by his side and his lovely companion Eliyah who has been looking after him for three years.

'What the hell, I've had a wonderful life'