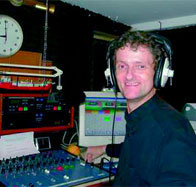 Written by Peter Moore: It is with shock and deep sadness that I announce the death in the early minutes of Jan 17th 2008 of my good friend and Caroline broadcaster Rob Leighton.

Aside from the fact that he was from time to time absent from his weekly programmes, his audience will not have known that Rob was continually suffering from and battling with a wretched illness called Crohns disease, a chronic and progressive condition that caused him much suffering, The nature of the illness meant, among other things, that his diet had to be precisely controlled. Any deviation caused severe reactions.

Returning from one of his many and ever more frequent spells in hospital, I asked him what had gone wrong this time and he replied, with just the slightest tinge of annoyance "you know, I just really wanted to eat an orange".

The archetypal stoic Englishman, if he ever discussed his health, he just stated that it was 'a bit of a nuisance' although I knew that he structured the recording of his programmes within a window of time when he was not either in too much pain to make the programme or so sedated by pain killing medication that he could not do a proper job. He did not want his audience to think that he might be drunk.

Typically, he worried more about my dubious health than his own. When he detected that I was under excessive stress he would warn, using the precise pronunciation that was his on air trademark 'Be careful, you are a thoroughly good chap you know and we don't want to lose you'.

Again it will not have been known that Rob was a brilliant technician. Some broadcast equipment is at his home, while he waited for his health to rally sufficiently to take it and install it overseas as a Caroline relay. He was also hoping that in the spring he might be able to go to Ireland top recover more equipment that he had built, which was then destined for Italy to set up a relay there.

I know that he was frustrated in having to hand in for a time his driving licence, but that he was waiting for the moment when he could again drive his much loved vintage Wolseley car.

Musically, he embraced the genre of progressive folk and rock, within which areas he was highly regarded. Rob's wife Sharon who called me with the sad news, mentioned that an album by the band Blue Horses had just arrived at their home in Staffordshire and that the band had thanked Rob and Radio Caroline personally for helping their career.

The gentlest of men, Rob never abandoned his ideals of tolerance, freedom, love and liberty. He was genuinely perplexed when some were unpleasant, cruel and even offensive in their criticisms of Radio Caroline. Certainly this news makes me understand that the petty squabbles I am presently involved in are supremely irrelevant.

I salute Rob, mourn his passing and am devastated and diminished by his loss.