9: What Goes Around, Comes Around
History repeats itself time and time again as Caroline struggles through the eighties

Previous: Bigger And Better Than Ever

Next: The Hard Fought Road To Recovery, Brought To Nothing By An Armed Raid

Caroline's re-launch was clumsy but still remarkable and if the actions taken in the planning and financing were to have rapid and ongoing repercussions they probably represented the only means by which Caroline could reappear. People were simply content to have the station back. 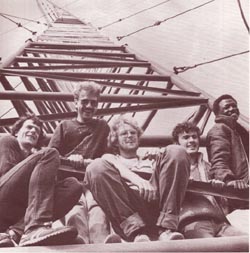 Listeners from the sixties were perplexed not to hear hits of that era plus lightweight current pop music, but those who had discovered the station during the seventies enjoyed their expected diet of Dylan, Clapton, and Peter Frampton. Audience figures whilst not dismal were moderate and this probably prevented the authorities and the UK commercial radio industry from being too hostile. It seemed that the station would probably be left to bumble along in its disorganised and very British manner.

The mostly positive coverage given to Caroline's return still voiced the obvious question of whether it could be financially viable. In his fatalistic manner Ronan explained that it was all down to the public. If they listened in sufficient numbers he could attract the major overseas advertisers that were needed to fund the operation. 'If nobody wants to listen' he told a TV interviewer,' we don't have a ball game'. Just as in the sixties, the big deals never did materialise. Some advertisers such as Nikon and Newsweek Magazine did place campaigns but later it seemed as though these ads were kept on for prestige and the paying ads were from minor players such as cut price holiday firms and overseas couriers.

Other parallels with the sixties were uncannily similar. Just as disgruntled investors who had been excluded from involvement in Radio London fitted out their own ship for Radio England, so various Americans excluded from Radio Caroline were, within one week of Caroline starting transmissions, converting a cargo vessel the MV Communicator as their own radio ship. This conversion unhampered by writs and disputes took only months against Caroline's three and a half years and, to the dismay of Caroline staff MV Communicator dropped anchor close by them on December 29th 1983 announcing the intention to commence broadcasting as the American staffed and styled Radio Laser. Many technical problems held back the launch but by late May 1984 the station was on air and, to Ronan's anguish, on the 558Khz frequency that he had originally coveted. With a fast pop music rotation and highly professional American presentation, Laser 558 then swept the board capturing not only a substantial part of Caroline's audience but that of Radio One and the various local commercial stations in the South East. 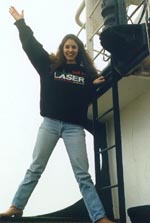 The attitude of the authorities and land based commercial stations toward the hugely successful Laser, was astonishingly hostile and unavoidably Caroline was caught in the crossfire. While both ships alluded to supplies coming legally from Spain it was obvious that the real supply route was by clandestine trips out of UK ports. In August 1985 a ship chartered by the British Department of Trade and Industry anchored close to Caroline and Laser. The plan was to identify any ship approaching either station and to track each one back to its home port where the operator could be prosecuted under the terms of the Marine Offences Act.

Fortunately Caroline did have some overseas tenders and rather more experience than Laser. Small glass fibre boats crept unlit alongside Ross Revenge at night since radar did not detect them the surveillance ship noticed nothing. The blockade though had a damaging effect on Laser. Morale on board deteriorated due to food and fuel shortages and equipment failure. In early November after enduring bad weather during which much of the ships systems broke down, the frightened American crew and exhausted Captain gave up and took the Communicator into a UK port where the ship was immediately impounded.

'One down and one to go' said British officials but in fact the surveillance operation then ceased and Caroline was left to continue. Staff formed the view that one station which caused little trouble and which had Caroline's long history would be unofficially tolerated. Caroline took over Lasers 558 frequency and modified its format to pop to retain the previous stations audience. Stalwarts such as Tom Anderson who had been through so much, and many of his musically like minded colleagues resigned. Caroline had been rescued by chance from problems largely of her own making but still needed income since the dream of overseas advertising clearly was not to materialise. In another repeat of history the station looked to Holland and soon the 50Kw transmitter on the Ross was contracted to play the programmes of Dutch Radio Monique while Caroline continued via a smaller transmitter.

Radio Monique like Radio Mi Amigo before, was not on air to promote some hippie cause of the individual against the system, or to market love and tolerance. Monique identified and targeted its market and started earning Guilders. The Dutch authorities let it be known that their intention was to trace the backers and discourage the advertisers. They conceded however that this was not easy and Monique continued to prosper.

For Caroline staff, sharing the ship with dour Dutchmen was not their favorite option but the Dutch were at least efficient. Large ships from the continent delivered plentiful supplies of food water and fuel. Cash became available for wages and fresh components could be bought to maintain the ship and her broadcast equipment. It was a satisfactory compromise and Ronan at least had his desired frequency and some semblance of his original format played to an audience handed to him by a defeated rival station. In all of Caroline's history, when a situation looked hopeless some lucky solution would always appear and the years 86-87 were a happy time. One dark cloud was that the UK had extended its territorial limit to twelve miles so that Ross Revenge left the sheltered Knock Deep to anchor in an exposed location at the South Falls. This was considered to be a minor inconvenience. Ross Revenge was a tough ship, O'Rahilly had chosen her well.

In mid October 1987 Britain was hit by a hurricane. All shipping ran for shelter aside from Ross Revenge. Of the vessels caught at sea one large freighter capsized off Dover and a continental ferry was driven aground on a Kent beach. Ross Revenge rode the hurricane out and to her surprise found the next day that she was one of the few radio stations still operating. Power failures ashore had silenced most of Britain's land based commercial stations. This was however a short lived triumph. On November 24th bad weather hit again. At about 4.00am on the 25th the ships crew were terrified as Ross Revenge took on a violent list amidst a cacophony of bangs and crashes of falling steelwork. The show piece 300ft tower, weakened by the hurricane had collapsed into the ocean. Neither Caroline or Monique could transmit any signal at all. When the weather settled, many crew packed their bags and quit for good. It certainly seemed that the party was finally over.

Previous: Bigger And Better Than Ever

Next: The Hard Fought Road To Recovery, Brought To Nothing By An Armed Raid