8: Bigger And Better Than Ever
Another revival, but in 'Caroline' fashion little goes according to plan

Next: What Goes Around, Comes Around

The loss of the Mi Amigo was extensively covered by the media with wistful admiration for the stations long struggle. The government was chided for its churlish hostility toward such a harmless and entertaining pastime. However the reports had the style of an obituary 'farewell Caroline, sadly missed'. The possibility of salvage was discussed. For a few months after the sinking, some superstructure remained tantalisingly uncovered at low tide and the aerial mast continued to point skyward for several years. The ship still lies in shallow water on the edge of the Long Sands in the Thames Estuary.

O'Rahilly did not take this chance to put the Caroline saga behind him. In Panama a company was created for the sole purpose of owning a fresh radio ship.

Increasingly Ronan was operating on instinct and 'vibes'. Two mystics, a mother and daughter, gave him advice constantly. Some cynics considered that they told him broadly what he wished to hear, keeping the predictions vague enough to be open to multiple interpretation.

Staff went on ship finding missions around the UK. In Portsmouth an ex-navy frigate was inspected. Tom Anderson went on board the stern trawler Lord Nelson and it seemed likely that this would be the new Caroline vessel. Then by pure chance O'Rahilly was told of a ship called Ross Revenge lying in Scotland. To the initial dismay of his crew and acting purely on instinct he decided that this was 'the ship'. In fact his instinct could not have served him better. Most radio ships were time expired coasters withdrawn from service with worn out machinery or with hulls that had deteriorated beyond economical repair. One could fill them with ballast and attach a huge anchor and they would be useable, whilst still being broadly unsuitable for their new purpose. 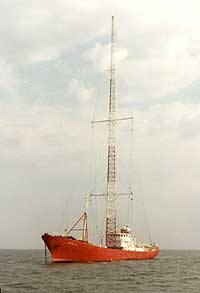 Ross Revenge was a massive side trawler, in good order, available only because the UK's capitulation in the Cod Wars with Iceland had left her with no work. Massively constructed to work and catch fish in conditions that would have other ships running for shelter, she also had excellent stability. Trawlers lay side on to the sea when hauling their nets. Although the occasions when O'Rahilly got it wrong are many, this time he undoubtedly got it right. With the matter of ownership not entirely settled, Ross Revenge abruptly left Rosyth with Caroline staff in charge and, after sailing through a severe storm in the Bay Of Biscay docked in Santander in Spain. The legendary Peter Chicago was sent to America to find good second-hand radio transmitters.

The U.S.A. featured in other areas. Clearly, having watched the painful deterioration of Radio Caroline, no European investors were rushing to finance a revival. Funds would have to come from far abroad where the basic difficulties of operating a floating radio station could more easily be disguised by references to pan European coverage and huge potential audiences. America and Canada were O'Rahilly's hunting grounds.

Self evidently, since through 1981 and 1982 Ross Revenge made steady progress toward becoming a radio ship, he did achieve funding, but from persons who caused delay and many problems. Soon, disgruntled investors were trying to hijack the entire operation either by force or court action. These disputes ran over into 1983 and while Ronan's team eventually emerged victorious it was a hollow victory leaving him with no money and an incomplete ship. Although it would now be vehemently denied, it is rumored that Richard Branson came close to being Caroline's new financier only to be turned down when it became clear that his money carried with it the requirement that Branson would have overall authority.

In planning the third era of Caroline O'Rahilly felt that simply to return in the same old form was not good enough. The new Caroline would have to be bigger and better than before. His requirement was a 50Kw signal on 558 Khz and being technically naive he was totally dependent on his engineers advice as to how this could be achieved. It did however suit his bigger and better stance to be told that the ideal aerial height was 300ft. Nobody had put such a tall tower on any ship before but at a reputed cost of £170,000, a giant antenna was made and installed. The pendulum effect of all this weight so high above the ship put its stability into question and required the hull to be counterbalanced with 500 tons of concrete ballast.

In order that his disc jockeys would have the right ambience Ronan wanted the studios built in a caravan welded to the aft deck and had to be persuaded that conditions in the North Sea would soon detach this structure – D.J's and all, who would find themselves in the ocean sans ship. He arranged for Ross Revenge to be painted pale pink since this was the colour of healing but his crew rebelled and chose a striking pillar box red. At great cost the hull was sand blasted back to bare metal and repainted to withstand the rigours of the ocean. Clearly money was spent that should have been held back for future emergencies but the outcome was a bright, shiny and totally impressive vessel.

For music policy, Annie Challis, ex-Radio One, was hired to programme a 'Gold' format which would at the time have been innovative. Finance to complete preparation and release the ship from Spain was raised by desperate means and Ross Revenge was towed out of Santander in early August 1983. The on air deadline was August 14th, sixteenth anniversary of the law that had been intended to finish Caroline off but incomplete studios and technical problems prevented this deadline being met.

To O'Rahilly's bewilderment, when the transmitter was first switched on for tests and in spite of the fact that all the construction work had been specifically for the 558Khz frequency, he found that his engineer Peter Chicago had chosen to use 963Khz (319 metres). Further, when programmes commenced at lunchtime on August 19th there was no sign of Annie Challis's Gold format. Tom Anderson whose musical tastes were becoming ever more alternative substituted his own rotation of album tracks and obscure material. The vast majority of the public who remembered Caroline, remembered the 64-67 era and tuned in expecting to hear the pop music of that time which by 1983 would have been regarded as ' Gold'. One wonders what they made of Anderson's programming of back to back albums with perhaps four DJ announcements per hour explaining what had been played and what was to be played in the next sequence.

What could O'Rahilly do? both Anderson and Chicago had been intensely loyal to him over the last decade, risking serious injury or death on many occasions. Further, his boast was that in all of the stations history he had never fired anyone and had in fact re-instated staff time after time in spite of their having committed dreadful misdemeanours.

Peter and Tom knew what they could get away with. While Annie Challis wept bitter tears of rage and frustration, Ronan shrugged and assumed that perhaps, in some karmic way, this was pre destined to happen.

So, from the best radio ship ever built, albeit painted the wrong colour, on the wrong date, wrong channel and with the wrong music policy, Radio Caroline had returned. Although nobody knew at the time, the date of August 19th would one day become famous for an entirely different reason.

Next: What Goes Around, Comes Around