7: The Golden Age
Lonely exile, Loving Awareness and programmes of pure magic as the Mi Amigo rusts away.

Next: Bigger And Better Than Ever 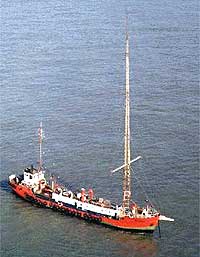 By the autumn of 1974 the Mi Amigo was the last radio ship broadcasting to Europe.

Radio Mi Amigo sharing the air time adopted a defiant stance, but still wished to show a profit. Dutch staff did their jobs for wages, not for ideals. Luckily this pragmatic Dutch efficiency produced finance to continue the Caroline dream. Other income came from broadcasting religious material. O'Rahilly also made reference to 'my friend George' as a sympathetic backer and it seems likely that he made use of his contact with the Beatles, to persuade George Harrison to make financial gifts.

Previously Mi Amigo had been in sight of land and generally had the company of other radio ships nearby. Now the crew scanned nothing but empty ocean. For some of the British, this was too much to bear, but those who remained or those who replaced the defectors had total dedication. Caroline had long since ceased to be about commercial success which indeed was all but impossible, and was now a survival crusade.

O'Rahilly had decreed that Caroline should now play only album music. A pop service would clash with the output of his Dutch customer and in the UK, such tastes were already catered for by Radio One and various new commercial broadcasters. Further he explained that album sales far exceeded the sale of singles and that his stations output should acknowledge this. However, the tastes of his broadcasters deleted most 'pop derived' album material. Caroline listeners thus could expect Led Zeppelin, Eric Clapton, Jethro Tull, Yes, Lynrd Skynrd, Barclay James Harvest and so forth, together with suitable Dutch bands, such as Golden Earring and Kayak. It is difficult to put into print the spell woven by this music when blended by the determined exiles on the ship. Quite unknown and unsung when they entered the UK on leave, but revered by a dedicated audience they had, in a situation which will probably never be repeated, only two aims. One, to stay on the air and two, to play the most wonderful music.

Tom Anderson on board the Mi Amigo

There were some great, if flawed, talents on board such as Tom Anderson, a vicars son, extensively tattooed, previously a Bingo caller at a travelling fair and Tony Allan a tortured, dangerous man but possessing the most perfect voice, vocabulary and delivery.

To make the magic complete was Loving Awareness. O'Rahilly, now viewed as a prophet, had devised this ethic in 1970. Mysteriously and perhaps conveniently he refused to define exactly what L.A. consisted of but was persuaded to give some indication in the following words.

'Our brain has both loving energy and defensive energy. We have tapped and used the defensive one but we haven't explored in any serious way the loving one. L.A. is about developing a loving habit. Love is our most natural emotion but is the one we abuse most. Life has become a daily survival of looking after number one. Caroline is showing people that there is another way. Quite simply, if you love people, they will love you in return'.

He continued this theme in the press, suggesting that Caroline which he now referred to as 'The Lady' had taken on a life force of its own.' I don't run Caroline' he insisted 'Caroline runs me'. Caroline was L.A. and L.A. was Caroline.

Mike Hagler, then a DJ, now influential within Greenpeace, was one staff member who with Tony Allan produced an emotive selection of Loving awareness jingles including a Hagler voice over on a Moody Blues introduction. Only Radio Caroline would persistently air a two minute promo for love and tolerance.

Even a cynic could put a case for the station having taken on a charmed existence. As Radio Mi Amigo's will to continue ebbed and finances and the condition of the Mi Amigo deteriorated, the station was financially supported, despite the Marine Offences Act, by the Caroline Road Show. This rock disco played to crowds often numbering thousands in Kent, Essex and the flat lands of Suffolk and Norfolk. No action was ever taken by the authorities. Crew and essential fuel travelled from various UK ports and inlets on the South coast and while there were token skirmishes and arrests no concerted efforts were made to close these supply lines. A number of times Mi Amigo broke anchor and grounded only to survive by lucky chance. The crew endured substantial danger and hardship and the station went off air many times, but invariably returned. The ship sprang various leaks which the crew plugged with wooden pegs and concrete patches.

The last return to air after a long absence due to generator failure happened in April 1979. In a voice full of emotion Tony Allan explained that the station would stay with the listeners.' for as long as humanly possible'. It was his concise way of saying that the end was not far off. The ship was now a wreck, powered by one generator bolted down to the aft deck, the main engine had been run to destruction and a disgruntled supply skipper had stolen the ships wheel. Life boat crews who had brought a sick crew man ashore denounced the vessel as a death trap and a tug captain employed to reposition Mi Amigo after a drifting incident complained that he could find nothing solid enough to connect his tow lines to. All that the ship could still do was to float and to produce a radio signal.

On March 19th 1980 Mi Amigo broke anchor again and while the crew lowered a spare the drift was halted with the vessel in shallow water and heavy seas. As the rising tide lifted her and pounded her old hull on the seabed, many leaks sprang up in the engine and generator rooms at the stern. After struggling for eight hours with portable pumps the crew admitted defeat.

Tom Anderson and DJ Stevie Gordon told listeners "It's not a very good occasion really, we have to hurry this because the lifeboat is waiting. We're not leaving and disappearing, we're going into the lifeboat hoping that the pumps can take it, if so, we'll be back, if not, well we really don't like to say it. I'm sure we'll be back one way or another. For the moment from all of us, goodbye and God Bless".

These were the last words spoken on air from the Mi Amigo's transmitters. A few minutes later the crew, plus the ship's canary "Wilson", were rescued by the RNLI lifeboat Helen Turnbull, the ships lights went out as sea water engulfed the generator and Mi Amigo sank. It seemed to all observers that this was the final end for Radio Caroline.

Next: Bigger And Better Than Ever