Next: The Golden Age

The Mi Amigo was rushed out to sea before the authorities could detain her, for being in poor condition. Much time passed until the generators and broadcast equipment could be made serviceable. Before the ship went for auction, engineer Peter Chicago - soon to become a Caroline legend - had removed vital electrical equipment which needed to be reinstalled. In the early days Mi Amigo was often unpowered and unlit. However when the transmitter was energised it gave a powerful 50Kw signal covering most of Europe.

Caroline fans were delighted. Other organisations were less pleased. By 1972 Radio Veronica had been operating off the Dutch coast for twelve years from the converted lightship Borkum Riff and later from the more modern ex-trawler Nordeney. Surprisingly there had not been a proliferation of Dutch offshore radio and this, together with the fact that Veronica used only moderate transmitter power and had an impeccable reputation, had prevented the Dutch government from considering hostile action.

In mid 1970 however Veronica had been joined at her anchorage by the ship Mebo 2, transmitting Radio North Sea International. Having been part instrumental in creating a new Conservative government in the UK the owners of R.N.I. had expected, indeed had allegedly been assured, that the previous jamming of the signal instigated by the previous Labour government would cease. In fact it continued until the Mebo 2 admitted defeat and relocated off Holland. Veronica were sufficiently concerned to maintain their own monopoly and carefully achieved status that they paid R.N.I. to go off the air but this arrangement fell apart when record companies made a better offer for the station to recommence transmitting. Motivated by rage, Veronica directors Bul Verwey and Norbert Jurgens paid to have the Mebo 2 sabotaged so that she would be obliged to enter port. Late in the evening of May 15th 1971 an explosive device set the engine room and stern of the radio ship ablaze.

Veronica's perfect image was destroyed, especially as the perpetrators were soon arrested and immediately implicated Verwey and Jurgens. Further the attack did not even achieve its object as the fire did not harm the transmitting equipment. Mebo 2 stayed at her anchorage and the damage was repaired at sea. 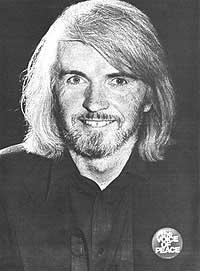 Now a third station, Caroline had arrived which was the last thing that Veronica wanted but for a very long time the equipment on the Mi Amigo was so unreliable and funds for repairs were so short that Caroline was off air more than it was on. While broadcasts were possible, Ronan's movie Gold was heavily promoted but with no discernible effect. The film never went on general release.

Various fortunate events kept Caroline operating. Veronica briefly hired the Mi Amigo when their own ship was driven aground in a storm. Then since Caroline was never going to be viable as an English service, deals were struck to hand over some air time to Dutch broadcasters, though this made Radio Caroline a 'Dutch' problem and actually set burning a slow fuse that was not to explode for a further fifteen years. The best remembered Dutch service to operate from the Caroline ship was Sylvain Tack's Radio Mi Amigo a wild mixture of Dutch pop tracks, drinking songs and barrel organ music. His involvement provided financial stability and ensured that an overnight Caroline service could continue even if it created no revenue. The Mi Amigo was made into a reasonably reliable operating unit. Although the entire period of the ships time off the Dutch coast and indeed the remainder of her life at sea was one of make do and mend. The original transmitter mast collapsed soon after the ship returned to sea, as did a replacement erected soon after. When generators installed within the ship failed, replacement units were craned on to the open aft deck.

The situation settled down with Dutch language and style radio during the day and English Caroline programmes at night, but sadly the elements that destroyed the UK offshore radio boom were also now present in Holland. From just Radio Veronica with a 10Kw signal on one non contentious frequency, the Dutch government now also saw the Mi Amigo with one 50Kw and one 10Kw transmitter on board which were sometimes used together for experimental stereo broadcasts requiring two radios. Further, the Mebo 2 had a transmitter capable in theory of 100Kw plus FM and two short wave channels and lastly there was the vessel Janine, home of Radio Atlantis. Another station Capitol Radio on board the King David was not at sea since technical imperfections, money problems and the incompetence of the operators collapsed the project after only a few weeks on air but this did not guarantee that some other group might not gain control and use the ship. 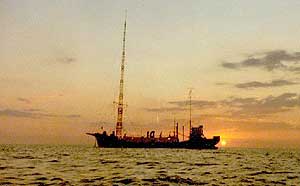 Thus Netherlands drafted its own anti pirate law which in spite of intense public protest made progress toward becoming law by August 30th 1974. The other stations announced as before their intentions to close but Caroline and Radio Mi Amigo insisted that they would continue. Sylvain Tack was sufficiently determined, to choose exile in Spain to keep his station operating

On the afternoon of August 29th the Mi Amigo summoned a tug to assist in raising her anchor and attempted, using her own ancient main engine to head away from the Dutch coast. After some hours of steaming where virtually no progress had been made a tow was requested and the ship headed towards the UK.

O'Rahilly had always wanted the ship close to England rather than Holland. This had been the basis of his original dispute with Gerard Van Dam. Only the convenience of tendering and the requirement of his Dutch customer for the best possible signal on the continent kept Caroline off Scheveningen. Now the Dutch law negated these considerations and Ronan concluded that when day dawned on the first morning that the Dutch law was in force it may be prudent to be out of sight and out of mind. Similarly he did not wish to be in sight of the British and so instead of the usual pirate anchorage off the resort of Walton Essex, Mi Amigo was delivered to a desolate anchorage in the Knock Deep at the mouth of the Thames Estuary visible from neither the Kent or Essex coasts. At this location and ostensibly operated and supplied from Playa De Aro in Spain, Radio Caroline and the ship commenced their next six lonely, difficult but remarkable years.

Next: The Golden Age