5: Movies, Mayhem On Land, The Second Era and Loving Awareness
Ronan becomes a guru for love and peace and gets the chance to start again

Ronan suggested that when Caroline was off air, the anguish he suffered, adversely affected his health. One wonders how he felt as the sixties drew to a close and the seventies dawned, while his ships lay rusting, vandalised and looted by souvenir hunters. The only temporary revival had been a few days on the transmitters of Radio North Sea.

In the time that Caroline operated from Holland, he had embraced aspects of the mellow Dutch life style. The dapper businessman became transformed into a softly spoken guru with beard and flowing grey hair. He was however not inactive and was considered to take over management of the Beatles.

Other O'Rahilly projects included a homeopathic hospital and modular housing for overseas and inner city use. He made the film Girl On A Motorcycle which while dated by today's standards was considered Avant Garde for its time and achieved cult status, thus funding various of his wilder schemes such as a water powered engine. He invested in the design of a space vehicle, to the stage of being shown a 'working' scale model. 'It was supposed to just lift up off the ground' he told a friend, indicating that at the time he had been so relaxed that the simplest thing could command his attention indefinitely.' I watched it for a very long time I never did see it move'.

In the UK, while the offshore stations had been defeated, the radio air waves were not pirate free. Resentment over the Marine Broadcasting Offences act had motivated various groups to hit back. Generally these were young technical college students or apprentice electricians who realised that it was not difficult to build a small AM radio transmitter and have their own pirate station. The first two who appeared, with substantial publicity since the matter was still newsworthy, were London stations. Radio Free London and Radio Free Caroline. Their high profile made it inevitable that they would soon be found and silenced, using existing legislation in the Wireless Telegraphy act. But the fines were not excessive and the operators enjoyed a 'Robin Hood' status. Not surprisingly the weekend and overnight air waves soon crackled with the music and chat of Radio Telstar, Radio Jolly Roger, Radio North West, Radio Pamela and countless more stations who could appear anyplace, anytime on spare radio frequencies which the authorities suggested did not exist. As a cottage industry sprang up, producing pirate transmitters and associated equipment it seemed that two stations appeared for every one that was closed down. It was only the fact that the operators were independent loners that prevented the development of a city wide or regional consortium of pirates, capable of giving the government insurmountable problems.

The task of locating and silencing land pirates was carried out by the British Post Office who sent out teams of technicians who became adept at scaling roofs, climbing trees and chasing miscreants across fields. Sometimes blows were exchanged. The most durable of the land stations was Radio Jackie with its theme tune 'Catch Us If You Can'. Jackie eventually opened an office and operated 24hrs a day before being raided and fined out of existence. A similar fate befell Radio Sovereign who pioneered the Gold format now widely used throughout the industry. With the start of FM broadcasting land pirating became more technically convenient and additional frequencies became available. The pastime, hugely refined in both operation and detection, continues to be an ongoing problem for the authorities. 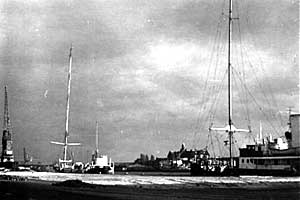 The two Radio Caroline ships
impounded in Holland.
The Mi Amigo (left) took to the seas again
in 1972 whilst the Fredericia (right)
was scrapped

By 1972 the tendering company Wijsmuller who had seized the Caroline ships for debt, decided to sell them while they still had some residual value. The larger MV Caroline was scrapped but the smaller Mi Amigo after being knocked down at auction for £2,400 became the property of Hofman Shipping Agency acting for a client, soon revealed to be a young Dutchman Gerard Van Dam using funds allegedly borrowed from his Grandmother. Again Ronan challenges strongly this version of the story suggesting that the funds came from another well wisher connected with the same company who had previously towed the ships in for debt. It may be that Van Dam and his 'Dutch Free Radio Organisation' were simply acting as front men and putting up a smoke screen that the ship was to be made into a free radio museum. A team of volunteers laboured through the summer remedying what they could of the decay and vandalism that the vessel had suffered. Again a variance exists between Gerard and Ronan's recollection for while Van Dam suggests he accepted finance from the charismatic Irishman and, perhaps unwisely, then handed over important papers for the ship, O'Rahilly insists that Van Dam was never a major player. Certainly as events progressed the Dutchman found himself and his insistence that the Mi Amigo stayed off the Dutch coast being sidelined until eventually all influence and connection which he had with the ship and the station ceased.

In September 1972 Mi Amigo left her berth at Zaandam and was towed along the canal connecting with IJmuiden which then gave access to the North Sea. The authorities were told that the 'museum' was being taken to England where it would have greater tourist attraction. In fact, once in international waters and, while the ship was still incomplete and unserviceable and as Van Dam says 'never, ever would she be seaworthy' Mi Amigo dropped anchor off the Dutch coast near the port and seaside resort of Scheveningen. The second and in many respects more significant era of Radio Caroline was about to commence.

At this time Ronan was producing the movie Gold,' The Story Of The New American Dream', having previously acted in another piece of alternative cinema, Universal Soldier. Gold, another Avant Garde offering was to premiere in London's West End. Without funds to mount a conventional publicity campaign, the possibility of massive radio promotion must have been tempting and one can only guess at the degree that Ronan's actions were influenced by this and how much he simply wished to revive his radio dream.

By the same token, he was also questioning attitudes in modern society where it seemed acceptable and commonplace to express feelings of dislike or downright hatred whilst it was difficult and embarrassing to express affection. This was based on his observation of the uncomfortable reactions of a group of adult friends when a child unknown to them all toddled up and told them that she loved them. O'Rahilly decided that love was not getting a fair hearing and that he would redress the balance. Locating a bunch of unknown musicians he told them that they were the 'Loving Awareness Band' and sent them off into comfortable isolation to think loving thoughts until they were ready to produce an albums worth of music on the subject. The Loving Awareness band produced only one album which probably forms part of the record collection of every Caroline fanatic, so heavily was it later plugged on the station. However it was not the album that Ronan mostly wanted to promote, it was the whole Loving Awareness ethic behind it. He decreed that the reborn Radio Caroline would sell love and a very hard sell it turned out to be.