4: Defiance, Defeat and Retribution
Caroline continues alone, is overwhelmed by difficulties but returns to punish the politicians

Next: Movies, Mayhem On Land, The Second Era and Loving Awareness

Through spring and summer of 1967 the offshore stations campaigned against the proposed Marine Broadcasting Offences Act. Politicians were deluged with mail from supporters, creating more correspondence on the subject than on any other matter troubling the population. The Conservatives were cautiously for future commercial broadcasting, but Labour in power were implacably opposed to it. Only the veteran Member of Parliament Manny Shinwell said the pirates deserved 'a fair crack of the whip'.

On the question of why licences could not be awarded, the answer, now shown to be spurious was that there were simply no radio frequencies available. Clearly public opinion counted for little and the Act made inexorable progress toward becoming law by midnight on August 14th.

Even before this, using some dubious arguments the government proved, at least to the satisfaction of the courts that some of the fort based stations must close because they were within British jurisdiction. Then came the shock announcement that Radio London who were expected to tough it out had decided to capitulate at 3.00pm on the afternoon of the 14th.

O'Rahilly however was adamant that Caroline would continue, by moving its base to Holland and ceasing to rely on the UK. During August 14th, station after station made their emotional farewells and shut off their transmitters. Radio London made their own dignified departure which Caroline acknowledged with a minutes silence. When DJ's from that immensely popular station reached Liverpool Street station in London furious fans rioted and for some hours chaos reigned. 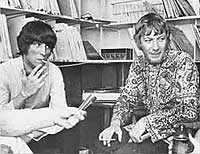 All day, listeners had inevitably been retuning to Caroline. Some of Ronan's men, having pledged to stick with him, deserted the ships, all these years later he still holds them in contempt. On the South ship Mi Amigo, only Johnnie Walker, Robbie Dale and news reader Ross Brown remained loyal. At midnight with an estimated twenty million people listening Walker took Caroline into its new era pledging that the station belonged to its listeners, that it would continue and that the legislation had actually acknowledged Caroline's legality. Stirring stuff which created Walker's position as the most famous offshore DJ of all time and which may have caused many to overlook presenters such as Robbie Dale, Carl Mitchell, Spangles Muldoon and Ross Brown who also decided to defy the law. In addition the staff of the North ship and various unsung engineers and crew ought also to have their loyalty acknowledged.

O'Rahilly's gamble was based on his own obstinacy, on his hatred of being told what he could and could not do and on the probability that being the only remaining offshore broadcaster would create such a massive audience that he could attract major international advertisers to replace the UK advertisers that the law now denied him. Tenders ran, quite legally from Holland though the distances were major and the costs huge. As autumn passed into winter discerning listeners could observe that morale on both ships was falling due to isolation, shortages and horrendous tender journeys. The adrenaline rush of defying the government had been replaced by loneliness and hardship.

Radio Caroline director Philip Solomon controlled Major-Minor records, an Irish label which had on its books various folk bands and crooners such as the Bachelors. As the stations money problems increased and Solomon's influence became greater, DJ's were obliged to plug his dire recordings and while The Dubliners, The Bachelors and singer David McWilliams achieved fame by this means it caused enormous resentment on both ships from the staff who had become political outlaws only to feed dreadful music to the listeners.

By March 1968 having survived the winter and with advertising income allegedly increasing it seemed Caroline's circumstances may be improving. However the Dutch company contracted to tender the North and South ships had not been paid and eventually lost patience. Early in the morning of March 3rd 1968 tugs simultaneously approached both radio ships, cut the anchor chains and towed them to Holland there to be impounded for debt. The defiant dream had failed.

Ronan put up a media smoke screen concerning servicing and reinsurance and attempted to purchase Radio London's ship but was defeated by the cost. He tried to buy the Radio 270 ship, Ocean 7 but was compromised by advance publicity. It gradually became clear that there was to be no revival for Caroline. Listeners drifted off to BBC Radio One – a watered down pop music service which had been introduced to appease the population.

By 1970 in spite of Caroline's experiences, two Swiss businessmen still considered that offshore radio could be a profitable pastime and equipped at great cost the vessel Mebo 2 as the base for Radio North Sea International. Arriving off the UK coast they at once incurred the hostility of the Labour government who under the influence of the later to be discredited Postmaster General John Stonehouse, tried to discourage a second proliferation of offshore radio by jamming the incoming signal.

After an earlier incident where Prime Minister Harold Wilson had raged at O'Rahilly telling him that he was 'finished', Ronan nursed a healthy hatred of the man. As The Mebo 2 countered its jammed signal a General Election was looming that Labour and Wilson were expected to win easily. O'Rahilly convinced the Swiss that public sympathy for them would be greatly enhanced by renaming the station Radio Caroline and this done he set about blatant on air campaigning against Labour, targeting marginal seats where control could change if only a few hundred voters switched allegiance. Breaking every law in the book concerning politics and the representation of the people, Ronan likened Wilson to Chairman Mao while Caroline battle buses toured marginal wards and thousands of rapidly recruited supporters fly posted millions of posters suggesting that a vote for Labour was akin to voting for a Marxist state. He instigated a rolling phone call campaign where each supporter would recruit by phone, three more supporters and so forth. He arranged for the phone lines into Labour HQ to be jammed by hoax calls.

The government had forgotten or failed to consider that this election was the first in which 18 to 21 year olds could vote and that these people had been impressionable teenagers when Caroline was at the peak of its influence. It was not difficult to motivate them to strike back at the politicians who had so arrogantly ruined their enjoyment.

On the day after the election as the votes were counted, shell shocked Labour politicians found that against all predictions they had lost. For Ronan while the score was not settled, the loss of his station had been partially avenged. Soon after on a London street O'Rahilly was baulked by a careless pedestrian. The two men stared at each other, Ronan recognising Ted Short, a senior Labour politician. Short recognised Ronan and said simply 'It's you. Why did you do it?'. 'Listen baby' replied Ronan using his trademark opening phrase, 'if you hurt Caroline, I hurt you'.

Next: Movies, Mayhem On Land, The Second Era and Loving Awareness