Previous: Don't Get Mad, Get Even

Next: Defiance, Defeat and Retribution

Listening to historic recordings, the early programmes from Radio Caroline now sound bland, awkward and amateurish. But to the population, all day pop music radio was a revelation. No speeches, lectures, gardening tips or cookery suggestions. No 'Woman's Hour' or 'Listen With Mother.' No music shows where massed banjo bands murdered current pop hits. By the autumn of 1964 Caroline had more listeners than the three BBC networks combined. 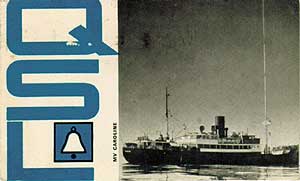 The furious Alan Crawford put Radio Atlanta on air right next to Caroline's wavelength, but Caroline had the audience and a merger was inevitable. Crawford's ship stayed off Essex and became Caroline South, while the MV Caroline travelled to her original intended destination near the Isle Of Man and became Caroline North. Now O'Rahilly had almost all of the UK plus Southern Ireland and substantial parts of the continent in range of his transmitters. 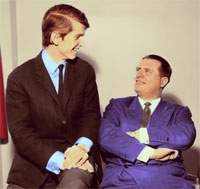 With Caroline as the catalyst and its audience of tens of millions, new music and youth fashion accelerated at astonishing speed and hundreds of new bands achieved massive and sometimes lasting success. Jonathan King, broadcaster and pop pundit recalls his simple throwaway pop song 'Everyone's Gone To The Moon' that within weeks of initial air play on Caroline projected him from obscurity to starring on prime time television at the prestigious London Palladium. Unknown actor Simon Dee, head hunted from Caroline, became one of the first superstar chat show hosts on British TV. 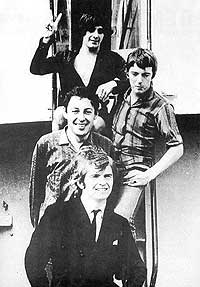 The blatant success of Caroline made imitation inevitable. In December 1964 the American backed and styled Radio London arrived on the vessel Galaxy. While Caroline could later claim perseverance and longevity, Radio London (Big L) delivered highly professional American programming that temporarily at least captured much of the audience of Caroline South requiring Caroline to quickly adapt its own style and format.

Later two more American influenced stations Britain Radio and Swinging Radio England went on air from one ship. Radio 270 started off the Yorkshire coast while Radio Scotland on board the old lightship Comet anchored off the Scottish East coast. In the Thames Estuary were various marine structures which had been wartime sea forts. Abandoned by the military they made excellent and stable transmitting platforms and were quickly boarded and claimed by further radio entrepreneurs. Soon Radio 390 an easy listening station and the most powerful of all the sixties offshore broadcasters was on air, while from other structures Radio Essex and Radio King started transmissions.

From the day that Caroline appeared the UK government made threatening noises but no serious action was taken. Now there were several independent broadcasters sending programmes into the UK and twenty million people were listening. Further stations were rumoured to be in preparation and for the government things were getting out of hand. It was a delicate matter trying to legislate against a pastime which was providing a third of the population with the best fun they had enjoyed in a long time.

Grumbling about unauthorised use of radio frequencies and the vague potential for cross channel interference cut no ice with the offshore radio listeners who perceived the government and the BBC to be grumpy killjoys. Legislating against the pirates was a vote loser and for some time there was a stand off where the authorities made dire threats but did nothing. As famous Radio London DJ Dave Cash recalled many years later, 'they could not act against us for the reasons stated. They needed something heavy like drugs or murder – we gave them murder'. 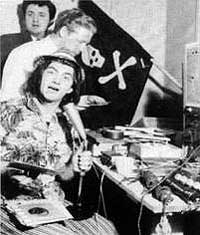 One fort based station was started by the flamboyant rock star and self publicist David (Screaming Lord) Sutch. Since offshore radio was news worthy, he founded Radio Sutch but when this had been milked for all possible publicity he sold the operation to his manager Reg Calvert who operated it as Radio City. The sea forts were a no mans land and control of them depended on who commanded the most muscle. After a business dispute another offshore entrepreneur Major Oliver Smedley hijacked Calvert's fort.

In a fit of fury Calvert, who was known to be a violent and irrational person, burst into Smedley's home and hurled a heavy stone ornament at him. He also claimed to be armed with a tear gas pistol. Smedley took up his shot gun and killed Calvert. The image of the offshore stations as jolly buccaneers using spare radio channels to provide popular free entertainment was irrevocably shattered. Now the government could portray them as battling, murdering gangsters and now that the Labour Government were secure in power for five full years, losing votes was no longer an issue. It was proposed to silence the pirates using The Marine etc. Broadcasting Offences Act, which would deprive the stations of staff, supplies and most importantly of revenue.

No more was heard about new stations being planned. Those on air began strident campaigns against the proposed law. Having previously embraced the term 'pirate radio' they now wished to be known as free radio stations. Most outspoken on the subject of freedom of the individual against the system was Radio Caroline.

As the days of 1967 ticked away, while the music and happy DJ banter still flowed from the marine transmitters all were aware that the good days were drawing to a close. There was speculation as to how many stations would or could continue in the face of the new law. It was generally thought that the smaller stations would fail but that the major players, London and Caroline, would survive.

Marooned with 15 men – read Sylvan Whittingham's account of her stay on Mi Amigo in 1965!

Previous: Don't Get Mad, Get Even

Next: Defiance, Defeat and Retribution