12: Salvaged, but can Caroline find a new home?
A homeless ship and new broadcast possibilities

Previous: Down and Almost Out

Next: Caroline tries to find a new platform, but which one?

Against all odds, calculated at 250 to 1 against, Ross Revenge was refloated by tugs from Dover Harbour Board and brought in to Dover. HM Customs, searched the vessel hoping to find drugs or contraband. Marine Inspectors from the government examined the ship in great detail and condemned it for innumerable faults and damage.

Dover Harbour considered that their salvage efforts were worth £120,000, but on seeing the condition of Ross Revenge and the mysterious circumstances which surrounded the ship of having no Agent, nor Owner, nor Insurers, they finally settled for £20,000. The recently formed supporters group Ross Revenge Support Group had a trickle of income, while two stalwarts John and Jennie Knight also raised funds. Caroline DJ Tony Kirk saw the possibility of taking a one month FM licence. By this means, Caroline briefly appeared on air covering the local area. The public paid to visit the mostly ruined ship and kindly bought merchandise. Thus it was possible to start paying the salvage fee via instalments and when it was finally cleared Ross Revenge was handed to Peter Moore via a Deed Of Release, thus achieving control of the vessel, but not ownership. Some supporters and staff were not happy that a legal broadcast had been made, even though this enabled Ross Revenge to be recovered.

It was realised that the novelty value of Ross Revenge being accessible and visible in Dover was only a temporary advantage, but an opportunity arose to take the ship to Chatham Historic Dockyard to form one of the exhibits there. The Management were greatly enthused. But no permission could be obtained to move the ship. Ross Revenge remained in Dover with further repairs and improvements taking place but with a debt growing with Dover Harbour Board for mooring costs. An attempt to ‘buy’ Ross Revenge and thus give her some sort of status was noticed by creditors and blocked. A temporary broadcast was made covering Chatham, but without the presence of a ship it was not a success.

By 1993 Dover Harbour wanted rid of the Ross Revenge and may have coerced the governments Marine Inspectors to examine her to see if she was fit to depart. They agreed to do this once only and for just one voyage, but due to the chequered history of Radio Caroline it was difficult to find any location that would welcome the ship. Eventually a mooring was offered on the River Blackwater in Essex.

The inspection showed that a substantial amount of work had been carried out such that the inspectors, who had previously held the crew and subsequent volunteers in contempt, now started to view them with a grudging respect. Dover Harbour Board however, whilst wishing Ross Revenge to depart, still required £11,000 in mooring costs. To show some goodwill Moore paid £2000 of his own money and promised payment of the balance in instalments as before. Under these circumstances, whilst being closely watched, the ship left Dover under tow bound for Bradwell in Essex. The authorities had assumed some plot was afoot to sink Ross Revenge mid voyage and thus claim on the Insurance. There was of course no insurance.

For some time the ship sat without incident on the river, gaining publicity from hosting short term broadcasts. But the law of diminishing returns was such that each subsequent broadcast had less impact than the last and while the local press were supportive the national press reported that Radio Caroline was a pale shadow of what it had been, with middle aged men acting out past glories.

The coastal resort of Clacton invited Radio Caroline to broadcast whilst at anchor in sight of the town, the closest possible situation to the way in which Caroline traditionally operated, but there seemed little possibility that Ross Revenge would be allowed to go there. 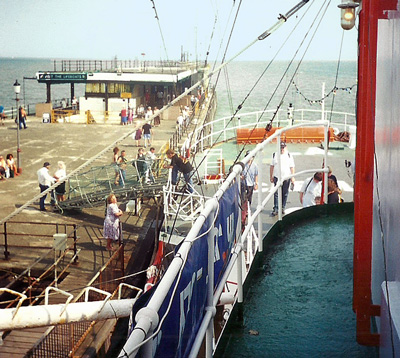 Visitors come aboard at Southend Pier

Surprisingly, the surveyors from the Marine Safety Agency, who had previously offered Radio Caroline just one voyage, went to considerable effort to devise a means by which the ship could travel by being given the classification of a coastal barge. The station broadcast successfully to Clacton for one month and then after a period at anchor was taken to Southend pier for public display.

The pressure group Charter 88 consisted of various celebrities and well meaning business people who felt that the UK should have, like America, a written constitution. Younger members of this group, hoped that young people may be persuaded to use their votes such that politicians took some notice of them and that they would listen to the credible voice of a pirate radio station.. Whilst being a very famous pirate, Caroline was not the sort of pirate nor played the sort of music that the young identified with, but the promise of finance to bring the ship to London was too tempting to refuse.

Honouring a promise made by DJ Johnnie Walker, Ross Revenge travelled up river to West India Dock, though it may not have been the triumphant voyage that Walker prophesied. Yet another one month broadcast was made from this location, nominally a success, but it is doubted that it did much if anything for Charter 88.

At this point the Marine Safety Agency stated that they could not continually permit the ship to travel from place to place, especially as they had been told that there was no insurance in place. It was said that the next trip had to be to a dry dock for a proper inspection.

Medway Port Authority had previously declined to allow Ross Revenge on to their river but now they had a new chief executive Captain Peter White who had previously been in charge of Dover, and as we had paid the salvage cost and the mooring fees when in that location he decided we would be good tenants. Ross Revenge went in to dry dock at Chatham Historic Dockyard, where some basic improvements were made such as new anodes, cleaning and painting the hull, overhauling all the sea water inlet valves and most importantly checking the hull thickness. The ship was then allowed to stay on the Medway where more temporary broadcasts were made with mixed success and reaction.

Previous: Down and Almost Out

Next: Caroline tries to find a new platform, but which one?