11: Down and Almost Out
Difficult decisions are taken as Ross Revenge is salvaged and impounded

Previous: The Hard Fought Road To Recovery, Brought To Nothing By An Armed Raid

Next: The ship is salvaged, but what next?

Ross Revenge, the once splendid radio ship was now a floating ruin. Raiders had sledge hammered the generators and attacked the rigging with an angle grinder. Studios and record library were empty. The transmitters were bare cabinets festooned with cut wires. But Peter Chicago was, with mad determination, trying to patch together one working transmitter out of the parts he had hidden The crew searched for any records which the raiders had overlooked.

On land Moore and Armstrong were becoming influential among the remaining staff. Their first coup was a protest rally where supporters were asked to bring a token gift. Reading between the lines, Caroline fans brought their entire record collections and tons of non perishable foodstuffs. A French radio station donated £2000 to open a fighting fund. UK commercial radio stations were full of Caroline sympathisers and a tender crept alongside Ross Revenge with a complete broadcast studio secretly donated by a Kent radio station. 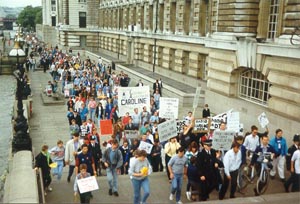 Caroline fans take to the streets to protest

Armstrong commenced hazardous supply runs in a rubber boat. Moore persuaded the legal fighting fund treasurers to give him money with which to buy precious fuel oil. He felt that while the ship was silent he should send out as much fuel as possible to withstand a later blockade. Meanwhile a serious rift was brewing. Peter Chicago despised Moore and Armstrong, regarding them as enthusiastic fools. Moore obtained agreement from O'Rahilly to stay off air until he had loaded the ship with fuel, food and records. Inexplicably Chicago had been told to get on air the very moment that the transmitter was complete. Unable to grasp the enormity of what had occurred Ronan was obsessed with holding his beloved 558 frequency to the exclusion of all other considerations. Having failed with a law suit against the makers of the useless glass fibre antenna, he now threw himself into mounting, with supporters funds, a case for compensation and damages against the raiders.

On October 1st 1989 the home made transmitter came to life. With only two disc jockeys and a handful of obscure records Caroline was on air again. Land staff were incensed. Hidden at Gravesend was a ship laden with fuel oil intended for the Ross, while van loads of records and supplies were stored awaiting transportation. The broadcasts compromised delivery of these goods and open warfare existed between Moore/Armstrong and Peter Chicago thereafter.

Up to spring 1990 Caroline was able to provide regular programmes, income came via a telephone news service, but in May a deliberate confrontation was forced when new station Spectrum Radio were told by the D.T.I. (the agency who were attempting to silence Caroline) that they must transmit on 558. Caroline was portrayed as the irresponsible party even after having used the frequency for five full years. Spectrum were assured that Caroline's power was too low to cause difficulty, but when a set of new radio valves were donated Chicago quadrupled the power of his signal and both stations created widespread mutual interference. Spectrums launch was ruined and while they were told that 558 was the only channel available, their threat to seek massive compensation from the Broadcasting Authority resulted in them being permitted to simulcast on 990Khz while the 558 transmissions continued, to disrupt Caroline's signal.

At this time all British broadcasting was being overhauled by means of the 1990 Broadcasting Act. Caroline examined the draft document but found only minor reference to marine radio. At the last moment however extra pages were added giving the UK armed forces wide powers to board radio ships in international waters and silence them using whatever force was thought appropriate. To block any possibility of legal redress, such as that which O'Rahilly was already seeking after the 1989 raid, future boarders whoever they may be were to be granted immunity from prosecution. It was a dreadful piece of legislation which one would only expect from a totalitarian state. Caroline fought in the British House Of Lords supported by 29 Peers but the government won. The Broadcasting Act would become law in the first moments of 1991.

Caroline staff were divided on how to handle their last months on air from the ocean. O'Rahilly now almost impossible to reason with, continued to imagine that he could continue on 558 with the protection of an overseas government. He started to mention a complete 50Kw transmitter which was in store in the U.S.A. More pragmatic staff wanted to shift frequency to avoid early action being taken against them, achieving at the same time a signal audible to the maximum number of listeners. It was generally considered that the British D.T.I. might leave the station alone until the new law was in force.

Suddenly there was a flurry of hostile action. Armstrong's inflatable tender was mysteriously sabotaged and two other tenders Fairwinds and the Dreamboat Annie were boarded by the authorities. Raids were mounted on two large ships that Moore owned in Kent. Every move to re-supply the ship was thwarted and clearly the D.T.I. were mounting close surveillance. Caroline's broadcasts became ever more sporadic as fuel and supplies ran out. In the early hours of Nov. 5th 1990 D.J. Neil Gates closed down programmes for the night but the next morning they did not re-start. This was the last broadcast ever made from the Ross Revenge in International waters. 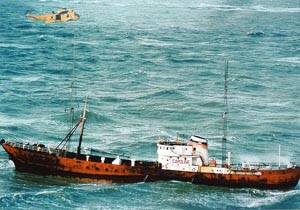 As 1991 commenced, the silent Ross Revenge was still anchored in the ocean. All sources of income had ceased. Ronan had nothing to offer. With the possibility looming that the crew may starve, some novel plan was required. The 'Ross Revenge Support Group' was formed. The doubtful suggestion that this association was just concerned with the ship and not the radio station contained on it, was sufficient of a grey area to enable supplies to be sent out legally. Monthly donations produced enough money for essentials and a small generator was provided for basic lighting needs, reducing the ships fuel requirements from 100 gallons a day to about 15. Essentially this new group bought time for Ronan to pursue his overseas licence dream. His disciples decided that his insistence in keeping the vessel at sea at all costs was preparation for recommencing operation as the authorised state broadcaster of another country. Those with a more jaundiced view suggested his interest was to protect the vessel from creditors and legal disputes. Certainly by the latter end of the year with no means of broadcasting having been found it seemed sensible to bring the ship in voluntarily and take the consequences but still she stayed at sea.

At one stage the demoralised crew abandoned the ship and Peter Chicago nearly died re-boarding the Ross before official vessels could tow her away. Then on the evening of November 19th in the middle of a fierce storm the anchor chain snapped. Disorientated by the severe weather the crew had no idea they were adrift until with a terrifying impact Ross Revenge grounded on the notorious Goodwin Sands, sixteen miles from her anchorage.

After bravely staying on board their listing, flooded vessel for three hours the crew, concluding that she was about to capsize, agreed to be rescued by helicopter. The Goodwins are a ships graveyard and poor old Ross Revenge was left to her fate.

Previous: The Hard Fought Road To Recovery, Brought To Nothing By An Armed Raid

Next: The ship is salvaged, but what next?