10: The Hard Fought Road To Recovery, Brought To Nothing By An Armed Raid
Desperate measures to get back on air are negated as the authorities pounce

Previous: What Goes Around, Comes Around

Next: Down and Almost Out

The mighty aerial was in the ocean. The ship was silent. Any semblance of being a normal commercial operation was over. Staff, working only for wages or career advancement left. Control of the station passed down to a collection of die-hards and fanatics. These people viewed O'Rahilly as a hero and obeyed him entirely.

The 558 frequency was intended for the BBC and Caroline was desperate to hold the channel. The loyal Peter Chicago strung a cage of copper wire from the ships funnel to its original front mast. This aerial was woefully inefficient, but the point was made. Incompetent presenters were allowed to play at being disc jockeys. O'Rahilly cared little about programme content, he knew that nobody was listening.

A workable plan to equip the ship with a good new aerial was needed. Increasingly detached from reality, O'Rahilly talked of a new 300ft tower, but this existed only in his mind. For many reasons, legal and certainly financial, the Ross Revenge could not go into a port, she would have to be repaired at sea. Radio Monique wished to return to the air. Thus their supply tenders kept operating. Money for new hardware was a problem, the Dutch were less willing to provide cash than materials. Nor could they be persuaded that Laser had produced an excellent signal from a cheap and modest aerial array.

A stop gap measure, consisting of a spindly lattice tower at the stern and a home made structure at the bow was jury rigged. Higher and longer, the new aerial worked more efficiently and the signal reached Holland again, but still the Dutch were denied their channel.

Sad and mastless - Ross Revenge after the storms of late 1987

Sophisticated electronics previously enabled two signals to radiate from one mast but this facility had been wrecked. Chicago, insisted that the interim aerial could not accommodate two signals so either Caroline or Monique could be transmitted, but not both. Caroline programmes produced income from religious broadcasts and from advertisements for a Canadian Lottery. This is probably why Ronan sided with the Caroline crew to the detriment of Monique. For a man who had made a life career out of marine broadcasting, he knew remarkably little about transmitters. The ingenious Peter Chicago probably could have combined two signals but technically there was nobody to question him. By being obstructive he hoped to spur his boss into greater efforts. It was a foolish ploy.

Ronan was told of new technology, where thousands of feet of copper wire were spiral wound on to a glass fibre mast and encased in resin. The result was a free standing eighty foot glass fibre tower which electrically behaved like a much larger and taller antenna. He was seduced by this excellent new idea and surely, he reasoned, if he put two masts on the ship Caroline could broadcast from one and Monique from the other. Without seeking technical advice he had two towers built.

When the first arrived, Chicago announced that it was totally unsuitable. As soon as the device was erected it swayed alarmingly and months passed while a means was found of restraining it. Then when it was energised it caught fire, broke in two and fell into the sea. In fact the device had a handling capacity of only 5 kilowatts so when Peter fed an experimental 15 kilowatts into it the tower self destructed.

By now nobody in the Caroline team wished to be involved in choosing masts and it fell to two volunteer helpers, Peter Moore and Warwick Armstrong, to locate sectional metal towers in a steel scrap yard. These 20ft sections which bolted together end to end were smuggled to the Ross on tiny fishing boats. General opinion was that the masts would soon fall down but in fact they stood until they were taken down in October 2012.

All of 1988 had been spent on this saga and eventually Monique insisted that it must take the Caroline frequency by day, calling itself Radio 558. This loss spurred the technical staff to make more rapidly the technical improvements required for two signals. By 1989 the Dutch had their channel, Caroline another, while a third service, World Mission Radio was being broadcast on a short wave frequency. Carolines 25th birthday was celebrated at Easter and it seemed that yet again despite much confusion and wasted effort all was now well. 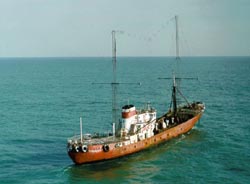 More modest masts, but at least Caroline could be heard again - until...

The conclusion that the UK and Dutch authorities had accepted Caroline as a fact of life was bolstered by the fact that the very obvious re-supply of heavy material to the ship both from the UK and France had been totally ignored. Staff found O'Rahilly's obsessive secrecy childish and unnecessary. In fact they were wrong. The Dutch had decided some years ago to take decisive action against Radio Monique but halted their plans when the tower collapsed. While the ship was producing a weak signal, action was low priority, but all activities were watched. The British, ever desirous to silence Caroline, were very happy to join the Dutch efforts.

On Saturday August 19th the unthinkable happened. The large Dutch vessel Volans with armed officials on board closed in on the Ross Revenge as did the British launch Landward. 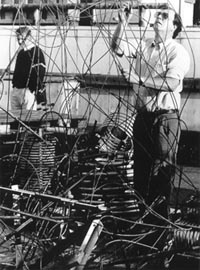 By means of violence and force of numbers the Dutch took control of the ship and as chaos reigned, the disc jockeys relayed a blow by blow account of events to the astonished listeners. Then when the transmitters were silenced the Dutch stripped the ship of all broadcast equipment while the British attempted to interrogate the crew under threat of arrest. All this happened in International waters where the boarders had no official powers. In the early evening, Caroline's British tender, posing as a press launch, reached the ship with some genuine journalists on board. The raiders immediately left taking with them all of the records, studios and transmitting equipment and leaving behind some vandalism and deliberate damage. They also left behind the British crew who refused to desert their ruined ship.

On the mainland, in Holland and France Radio Monique staff had been arrested in simultaneous dawn raids. The Monique organisation was destroyed and Caroline heard nothing from them ever again. On the Ross Revenge on the morning of August 20th Peter Chicago rallied his shocked crew. In the confusion of the raid he had managed to hide various vital components, with these and items which could perhaps be smuggled out from land it might just be possible to build one working transmitter.

Any normal group of people would have realised that the situation was hopeless, but these were not normal people. Meanwhile Caroline's UK land staff were perplexed that they too had not been arrested, but since they had not they started planning. Ross Revenge would need food, fuel and water, studio equipment and a fresh record collection. Obtaining these goods would be the best way that they could counter attack.

Previous: What Goes Around, Comes Around

Next: Caroline In Captivity