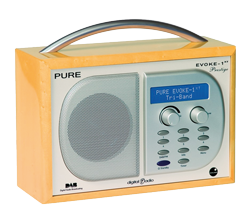 Cynics have described DAB as 'a solution to a problem that does not exist', but conversely while AM radio works as well as it ever did, it is increasingly challenged in heavily populated areas by the proliferation of devices that cause local interference. Even without this, the Government and Ofcom surely decided long ago that DAB was the way forward with the intention, maybe, of eventually recovering FM and AM for other uses and it was and is thus relentlessly promoted.

Smaller FM operators complained that DAB was expensive, such that wealthier, larger, stations would just price them out of the market.

But a clever Ofcom techie devised a means of sending DAB affordably, if locally, and Ofcom decided to licence some trial test areas. This was limited to ten trials (we know not why that number) and 51 groups applied. Several stations could be part of each trial which was to be of nine months duration, ending in June of this year. Caroline joined two applicant groups, but while neither was chosen by Ofcom, we were invited to join the successful Aldershot/Woking trial, then Norwich, Portsmouth, Glasgow, Birmingham, Brighton and now London.

With a previous history of one month RSL's (Restricted Service Licences), DAB was far better. The licence and Royalty fees were modest and carriage was at first free. Best of all, the service did not have to end after 28 days.

DAB has been around for some time and radio sales were at first very slow, such that with the passage of time DAB itself became old technology. Now the new standard is the improved DAB+. Sadly, older radio sets will not pick up + though new and more modern radios will get both. In our trials we use DAB in some areas and + in others. This is due to what the operators had available to offer us.

As evidenced by the fact that we are still broadcasting, Ofcom decided to extend the trials beyond the original end date of June 2018. It seems at least probable that at the end of that time these will become permanently licenced small scale commercial Multiplexes. This 'Mux' is a selection of stations carried by one operator. Having budgeted at first for up to June 2016, the operators now require a fee for future transmissions, while the royalty organisations who sought a fixed fee for the whole nine month trials, now require further regular payments. At this point the costs are reasonable. Just now we feel we will continue on these DAB areas, and maybe others, and indeed in some cases have paid a year in advance. We may reconsider if the costs increase substantially or if we find a better use for our budget.

It needs be remembered that these services are very local. In the Aldershot trial for instance a transmitter was placed in Woking and the signal barely reached Aldershot, later a second transmitter was employed to extend coverage. In Glasgow also, one transmitter became two with talk of a third. One can surmise that the other operators will seek to make their signals more robust. But, these trials are NOT protected from interference and it is in the nature of DAB that if a major player such as the BBC establishes a powerful transmitter in the same area, radios, especially cheaper and older ones, will struggle to lock on to our low power signal.

Thus while we would be pleased if listeners invested in a DAB radio to hear us (see coverage maps for service areas), we suggest that you might borrow a DAB set, to see what you can hear either indoors or outdoors before purchasing your own set.