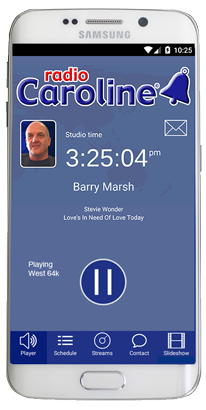 This version includes a new Slideshow page, a new Contact page and the ability to auto-stop the player for an incoming phone call (see below for an important note on this).

Other features include a 'Now Playing' feature so you can see details of the current track, a number of stream bitrates to suit most situations, full programme schedule with programme 'alarms' — never miss a show again!

And for special broadcasts from our radio-ship Ross Revenge we can automatically add or remove a dedicated 'Caroline North' stream.

This version also helps to overcome the Android operating system's 'Doze' battery saving feature which can restrict internet access to apps after a while when the lock screen is on – even those playing or streaming audio.

Compatibility: Any version of Android 4.1+ (Jelly Bean or above). It will not run on any Android versions lower than 4.1, which are now obsolete. And it won't run on a device whose processor is based on the x86 instruction set.

In order to monitor for incoming phone calls and stop the player we have had to include Android's READ_PHONE_STATE permission which forces a user to agree to allow the app to 'make and manage phone calls'.

We can't change the text although we do not 'make' nor 'manage' calls, simply monitor for an incoming call in order to stop the player. But if you are at all worried then don't agree to the permission, which will just mean you continuing to stop the player manually.

We offer a special version of our app for our North American listeners with streams locked to Eastern Standard and Pacific Standard times so you can wake up to our breakfast show in the morning, and relax to our night time shows at the end of the day – just as they are intended to be heard.

Please note that these streams are only available in North America.